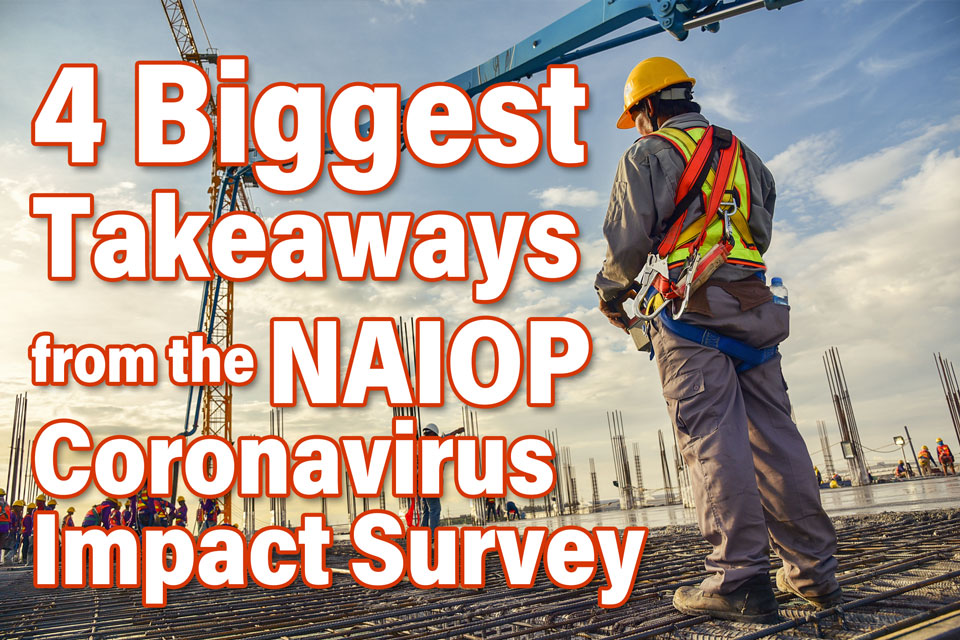 The Commercial Real Estate Development Association, known as the NAIOP, is a prestigious organization for members of the Commercial Real Estate community. NAIOP is an acronym for the group’s former name, National Association for Industrial and Office Parks. NAIOP provides advocacy, education, and business opportunities by connecting members in a powerful network in the CRE development and investment industry.

In the last two weeks of May, the NAIOP conducted its second survey of 461 members on how the coronavirus has affected their businesses and local markets. In the May survey, the developers were asked to compare how their business was performing in comparison to the April survey results, which are also available on their website. The survey results reveal the outbreak does continue to effect their business, and will likely do so for longer than previously anticipated. However, there is also indication that impacts have moderately diminished compared to April. Other promising results indicate Commercial real estate firms’ response to the outbreak has also evolved.

According to the NAIOP Coronavirus Impact Survey, the delay in permitting or entitlements is still being reported at a majority, around 62% of respondents. Slightly over half of these developers experienced lower leasing activity for projects in May, around 57%. While this is a high percentage, there is still a slight overall improvement over April. The good news is that, with the exception of a minimal uptick in respondents reporting delays in financing, the percentage of respondents who reported negative impacts on their current projects had decreased for every other metric measured compared to April.

One of the most dramatic improvements in this report is the number of respondents who felt that they were experiencing either delays or shortages in construction supplies. In April about 31% of those surveyed affirmed this concern. That number dropped to 19% in May. Research Director for NAIOP, Shawn Moura, Ph.D., says that “this may reflect a resumption in shipments of supplies from China”. There are still some state and local governments enforcing the suspension of construction activity, which still has an adverse effect on projects for 32% of developers.

The share of respondents reporting no deal activity was still high at around 40% for industrial buildings and nearly 60% for multifamily. However, there is a silver lining with these figures. Industrial and multifamily developers are certainly celebrating the increased activity in acquisition and development of properties. Industrial developers reported a 7% increase of new development projects in May and a 5% increase in acquisitions of existing industrial buildings. The National Association of Home Builders (NAHB) reports that multifamily developers are adapting as best they can to the changes caused by COVID-19. This is evident in the improvement of deals for this sector. Multifamily reported that new property development increased by 4.7% and acquisition of existing multifamily buildings increased by 10%. As stated in the report, Moura explained that these improvements “suggest that lending has begun to stabilize and that participants are more willing and able to price deals”. You can read more about lender behavior during the pandemic in one of our previous articles, by clicking here.

Unfortunately for the office building sector, business still appears bleak. Most of the respondents in the survey who deal with development and acquisition of office spaces reported continued or worsened negative impacts in most categories. About 70% of these developers saw no deal activity at all, a response which was worse than back in April. There was no new development reported in this segment of CRE, and they saw fewer acquisitions of existing office buildings in May.

Retail developers fared even worse than those in office. A sobering 85% of those surveyed said that they saw no deal activity since they were last surveyed in April. This makes sense when you consider that this sector was the hardest hit at the onset of the pandemic. Across the nation, we saw sharp declines in discretionary consumer spending which management consulting firm, McKinsey & Company says “crippled nonessential retail (other non-food, apparel, fashion, and luxury products)”. This aligns with the survey findings that acquisition and development of retail properties has essentially stopped.

4. More respondents expect the outbreak’s effects on their business operations will last longer than a year.

A majority of respondents currently expect that the coronavirus will have significant effect on their business of a year or less. Yet, the percentage of respondents who expect the impact to last longer than a year has increased compared to April’s survey, from 36% to now 45%. While still a minority, there was a small increase of respondents who fear they may have to reduce their staff size. There were no significant changes in the strategies that building owners and operators are using when working with tenants to adapt to the outbreak such as delaying rent payments. We talk more about these strategies in our last blog post about Multi-Family Industry Predictions for Rent Collection, linked here.

NAIOP plans to conduct a follow up survey in June.